Is it possible to teach respect for racial and religious differences?

This is a question I hear a lot from teachers who are committed to social justice but frustrated by mounting evidence of blunt and sometimes deadly prejudice. ADL recently confirmed that since 2016 antisemitism has dramatically increased in the U.S. and abroad. The Southern Poverty Law Center (SLPC) reports, “a surge of incidents involving racial slurs and symbols, bigotry and the harassment of minority children in the nation’s schools.”

It’s a fair question, and a rational one. Does classroom instruction on racial and religious tolerance make any difference at a time when intolerance is on the rise?

It does, and scholars have documented that studying the Holocaust and racial equality cultivates respect for diversity and fortifies democratic ideals. Teaching about the Holocaust is one of the most powerful ways to help young people understand the dangers of unchecked biases, and how, even in modern, democratic societies, these biases can escalate to catastrophic proportions.

In fact, the nation’s first program of anti-bias education was developed during World War II to “inoculate” American youth against Nazism. As one teacher insisted in 1941, “The most vital program of our country today and one, therefore, especially important to our schools is the promotion of the doctrine of tolerance as a means of knitting our nation into one closely integrated unit.” Scholars including the anthropologists Franz Boas, Ruth Benedict, and Margaret Mead developed K-12 curricula—including comic books and animated films—designed to teach students that Judaism was a religion, not a race, and that there was no such thing as racial superiority. 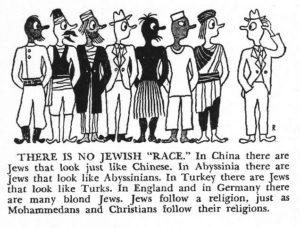 Figure 1 An image from The Races of Mankind, by anthropologists Ruth Benedict and Gene Weltfish, in 1944. Anthropologists during World War II believed that teaching the scientific definition of race would undermine Nazi racial doctrines and fortify American democracy.

Times of crisis, like World War II, force educators and politicians to recognize that unchecked bias is a direct threat to American democracy. That is why antiracist education became so popular during World War II, as I document in my book, Color in the Classroom: How American Schools Taught Race, 1900-1954.

It’s also why anti-bias education is such a hot topic today. Anti-bias education is designed to address prejudices including racial, religious, ethnic, gender, sexuality, social class, and immigration status. Teaching young people to identify and resist biased attitudes usually includes a study of historical events where small prejudices grew into acts of discrimination, which, in some cases, escalated into state-sponsored violence and genocide. The Pyramid of Hate found in Echoes & Reflections offers students a graphic representation of this danger.

As the Director of the Holocaust, Genocide, and Human Rights Education Project at Montclair State University (MSU), I have seen interest in our anti-bias programs surge since 2016. Our Holocaust education workshops fill up with a diverse group of people including not only K-12 teachers, but also school administrators and college students. Other human rights programs such as Native American environmental justice and support for Lesbian, Gay, Bisexual, Transgender, and Queer (LGTBQ) students are also popular. Educators are ready to teach lessons emphasizing respect for diversity and equality—what they need is more support.

This is where higher education has a vital role to play. American colleges and universities can support stronger and more robust anti-bias education in our K-12 schools. The question is, how?

First, universities can host professional development workshops such as Echoes & Reflections for K-12 educators and student teachers, including alumni. These workshops offer hands-on training in how to teach about the Holocaust—a topic that many K-12 teachers are nervous or unprepared to talk about. Participants gain access to online teaching materials including primary historical documents, photographs, interactive maps, and survivor testimony and are provided with models of how to incorporate these texts into effective lessons. Special thematic workshops on topics like antisemitism or immigration help teachers make direct connections between the Holocaust and current events. At MSU, we find that blended workshops with K-12 educators and student teachers create especially dynamic spaces. What is more, when a prominent university hosts a social justice education workshop for local teachers, it signifies to the broader public scholarly support for anti-bias education.

Second, scholars and university administrators can advocate for legislation requiring anti-bias education in public schools. New Jersey is a leader in this area. In 1994 state legislators mandated education on the Holocaust and genocide. Earlier this spring, New Jersey passed a law requiring instruction on Lesbian, Gay, Bisexual, and Transgender social, political, and economic contributions. These laws provide critical support for anti-bias education in public schools, especially in communities where such lessons may be seen as controversial. In New Jersey, teachers can point to state law and continue the hard work of teaching children to understand and respect one another’s differences. The New Jersey Commission on Holocaust Education coordinates anti-bias education through a network of centers located the state’s public and private colleges and universities. Despite New Jersey’s success as a leader in anti-bias education, few other states have similar structures in place. If more states required and supported anti-bias education, it would expand training, resources, and support for K-12 teachers. 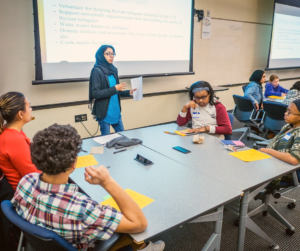 Third, universities can mobilize our greatest resource to promote anti-bias education—our amazing students. MSU hosts a Human Rights Education Internship, where undergraduate students can apply to train as professional human rights educators. Interns select a specific human rights issue and spend a semester learning about human rights law, researching their selected topic, developing an effective lesson on it for a secondary school audience, and then teaching it in a local school. This spring we hosted a “Human Rights University for a Day” at Montclair High School, where interns taught lessons on Holocaust denial, the gender wage gap, juvenile incarceration, school segregation, religious tolerance, the Central American refugee crisis, the healthcare crisis in Venezuela, child labor, and colorism. The internship serves two purposes—first, it allows undergraduate students to train as human rights educators, skills they will carry with them into their future professions. Second, the internship sends undergraduate students as human rights education ambassadors into local public schools, where they not only teach about important subjects that are not necessarily part of the regular curriculum, but where they also model what it looks like to be an engaged, socially conscious college student. Put plainly, human rights education interns inspire youth to go to college! The results are inspiring for both our interns and the high school students they meet, and help our university forge new relationships with our local community.

Is it possible to teach respect for racial and religious differences in K-12 schools? The answer is yes, but our teachers need more help and American colleges and universities are uniquely positioned to provide it.

About the Author: Dr. Zoë Burkholder is an Associate Professor of Educational Foundations at Montclair State University, where she serves as Director of the Holocaust, Genocide, and Human Rights Education Project (On Facebook: @MSUHumanRights). She is the author of Color in the Classroom: How American Schools Taught Race, 1900-1954 (Oxford University Press, 2011). She may be contacted at burkholderz@montclair.edu