Set among the bucolic farm fields and rural communities of southern Wisconsin, Clinton, where I live and teach, is the quintessential American small town. The center of the community’s social life is the Clinton Junior-Senior High School, which prides itself on traditions, such as the homecoming parade, chili and cinnamon roll fundraiser, and drive-your-tractor-to-school day.

Holocaust education is an equally valued part of children’s middle and high school experience in this community, from reading survivor memoirs and novels to the annual 8th-grade trip to the United States Holocaust Memorial Museum in Washington, D.C. By the time students enroll in my junior-senior “Genocide and Human Rights” elective course, most of them have studied the Holocaust numerous times in their social studies, English language arts, and German classes.

Studying the Holocaust can serve as a bridge for teachers and students to incorporate other instances of genocide and mass violence in the classroom, including the genocide of Indigenous peoples. While Holocaust education has become an integral part of the curriculum in Clinton, students have little knowledge or even awareness of the local histories of Indigenous genocide. Students often struggle to name the Ho-Chunk as the Indigenous nation whose ancestral land the town and school are located. Not unique to students in Clinton, in big cities and small towns across the United States, there is little awareness of Indigenous communities and the violence perpetrated against them.

I have found that in my “Genocide and Human Rights” course, students’ prior experiences learning about the Holocaust provide inroads for teaching about the genocide of Indigenous peoples. The pedagogical recommendations from Echoes & Reflections and the United States Holocaust Memorial Museum are the bedrock of discussion on teaching hard history and are certainly applicable and advisable for teaching about other cases of genocide and mass violence. Recommendations, such as “contextualize the history” and “teach the human story,” are equally important in lessons on Indigenous genocide and the Holocaust, helping students understand the larger context that surrounds episodes of genocide and mass violence and the experiences of individuals. Furthermore, these principles have been guideposts to help me develop the following guidelines to support teaching about the genocide of Indigenous peoples.

In a neatly manicured park on the edge of Clinton stands the rough-hewn Skavlem-Williams Log Cabin, which, according to the accompanying historical marker, is a “visible reminder of the sacrifices made by early pioneers as they settled this area.” 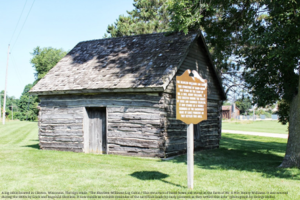 Notably absent from the signage is any mention of the Indigenous inhabitants of this land. Like many communities across the United States, Clinton has a long history of excluding Indigenous peoples from local narratives that celebrate only Euro-American settlement and achievements. The practice of memorializing the “first” Euro-American settlers through monuments while simultaneously writing the perceived “last” Indigenous peoples out of existence is what Jean O’Brien (White Earth Ojibwe) referred to as “firsting and lasting.” In local histories, such practices further the myth of the “vanishing Indian,” or the notion that the Indigenous peoples vanished due to genocidal violence and assimilation by the end of the nineteenth century.

Examining this local signage inevitably leads my students to ask: who were the Indigenous peoples who lived on this land before the first Euro-American settlers arrived, what were their lives like, and, ultimately, what happened to them? These questions form the basis for our unit on Indigenous genocide. Fostering a classroom learning community that encourages students to ask such essential questions is the first step towards an inquiry-based approach to Holocaust and genocide education.

While students are generally aware of the so-called “Trail of Tears,” and some even may refer to this forced removal of tribes from the American southeast in the early 1830s as genocide, they know almost nothing about the local histories of dispossession and violence, such as the treaties that were signed with Indigenous communities or the Black Hawk War of 1832, which made Euro-American settlement possible in southern Wisconsin.

Teach about the Continuing Legacies of Genocide

Though one might point to specific events or instances of violence in nineteenth-century state or national history, the genocide of Indigenous peoples in North America has had far-reaching consequences stretching into the present. To elucidate the legacies of genocide for my students, I use Aaron Huey’s powerful TED Talk, “America’s Native Prisoners of War,” in which he uses contemporary photographs of the Pine Ridge Reservation, one of the poorest places in the United States, to show the legacies of centuries of dispossession, forced removal, and genocidal violence. Though it is important to show the realities of the legacies of violence for contemporary Indigenous peoples, communities have always resisted and survived, maintaining their cultural traditions, despite physical and cultural genocide. My students and I use a collection of video essays, “The Ways: Great Lakes Native Language and Culture,” to examine, for example, language revitalization efforts and the Manoomin (wild rice) harvest.

If the opportunity presents itself, partnering with local Indigenous communities offers students an extremely powerful learning opportunity. Ho-Chunk oral tradition states, “we have always been here.” This unequivocal statement is a powerful salvo to challenge the exclusion and misrepresentation of Indigenous peoples that students have experienced in classrooms and curricula. Importantly, I partner with local Indigenous communities to provide opportunities for them to share their collective histories and individual stories. In this way, genocide becomes one part of the larger story of Indigenous peoples, which neither begins nor ends with colonization in the nineteenth century. Just as the Holocaust must be contextualized in the broader history of European and Nazi antisemitism, Indigenous genocide must be taught within the larger context of colonialism. Additionally, partnering with local Indigenous communities helps eschew the foods-and-festivals approach to teaching about “foreign” cultures for in-depth discussions of treaty rights, language revitalization, and tribal efforts to buy back ceded/stolen land. For many students, these are difficult discussions bridging histories of genocide and contemporary realities based on legacies of mass violence.

Recognize the Difficult Nature of Teaching and Learning About Indigenous Genocide

Teaching and learning about national and, especially, local histories of genocide perpetrated against Indigenous peoples is often difficult for non-Indigenous teachers and students. Such narratives challenge foundational stories about local communities and the United States, often evoking feelings of guilt and shame among white students. When left unprocessed, feelings of shame and guilt can result in minimization, distortion, and denial of Indigenous genocide in classrooms. Though teaching about difficult histories of violence in the United States may evoke feelings of guilt and shame, this should never be the goal of such lessons; rather, teaching and learning about difficult histories should provide opportunities to learn about historically marginalized groups, examine contemporary realities within society, and imagine and envision a more equitable future. As with Holocaust education, educators should focus on promoting empathy and understanding when teaching about Indigenous peoples and guide students “safely in and safely out” when teaching about Indigenous genocide.

Do Not Engage in Classroom Discussions that Minimize, Distort, and Deny Indigenous Genocide

Debates about the appropriateness of applying the term genocide to the experiences of Indigenous peoples, statements such as “Indigenous peoples were just as violent (if not more violent) to other Indigenous groups as the Europeans were towards them,” or sentiments, such as “the destruction of Indigenous peoples was simply the inevitable result of two cultures colliding,” serve to minimize, distort, and deny genocide. Like Holocaust denial and distortion, debating and rejecting claims of Indigenous genocide furthers misinformation and prejudice while disregarding the realities of colonization in North America.

My students immediately recognize that such attitudes can have far-reaching consequences for society. While students are quick to see that contemporary Germany offers one model for recognizing and atoning for difficult histories, I remind them that, within the American context, we must imagine and enact our own paths towards social justice. Indeed, we end our unit on Indigenous genocide by exploring several models of reparative justice from Canada to South Africa.

About the author: George Dalbo is a high school social studies teacher in rural south-central Wisconsin and a Ph.D. Candidate in Social Studies Education at the University of Minnesota. His teaching and research interests center on Holocaust, genocide, and human rights education in middle and high school social studies classrooms and curricula. He works with Echoes & Reflections to facilitate training and develop curricula on the Holocaust.